South Cambs radio controlled car club was setup in late 2012 in the village of Cambourne, Cambridgeshire. Setup as a gt12 club with just a hand full of members running in the church hall using whatever they could lay there hands on to create a track, and chairs for a driver’s rostrum . In early 2013 the club moved to its current home in Papworth. A much larger more suitable hall with hard wood flooring (not very flat in places though I might add). Over time some second or maybe third hand prima felt carpet was purchased, a better rostrum was made and track markers were acquired. The track markers, square drain piping, are Velcroed to the carpet creating sturdy barriers but still forgiving enough so as not to damage the cars, and a new track layout can be designed and raced every week to keep things interesting. The timing equipment was being rented on a weekly basis from another local club, Cambridge radio controlled circuit car club. In 2014 the club had to move

to a temporary venue in Bassingbourn while the village hall was refurbished and in spring 2015 we returned back to Papworth to the much improved and updated hall.

Numbers steadily began to build and we where able to purchase our own timing equipment in 2016 and early in 2018 5 brand new rolls of lindau carpet where purchased bringing fantastic levels of grip and much more consistent racing surface. Race control and the pit area is on a stage at the end of the hall overlooking the track giving a great view of the action and plenty of space to work in. Every heat and final results are printed and displayed at race control for the drivers to analyse  their laps good or bad.

After the arrival of new carpet the decision was made to add a new element to our club, we started 1/10th indo 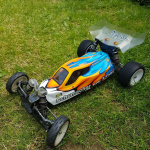 or offroad buggy racing every other friday. The club has always had a relaxed family friendly atmosphere encouraging young and old to come and have a go but with buggys even more fun and laughter can be had. Once a year we are proud to hold a regional event alongside 5 other clubs in the east Anglia area attracting up to 50 drivers including several top national level drivers.

‎South cambs races gt12 every Monday night with track setup starting at 18:45 and heats beginning around 19:30 the heats are sorted by ability (F1’s the fastest through to F4) so you only race against drivers of a similar skill level but
wit

h the challenge to reach a higher level final if your skills permit. Throughout the year we run several championships with trophys for the winning drivers in their formula. And theres allways chocolate eggs to be won at Easter and other prizes throughout the year.

‎Every other Friday evening is buggy night, it starts at the same time and is run in the same style where drivers are ranked on ability. After every race night full results are posted onto the results page on this website with a video of each final allowing racers to analyse the ups and downs of their evening.